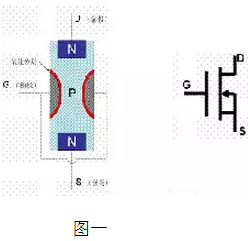 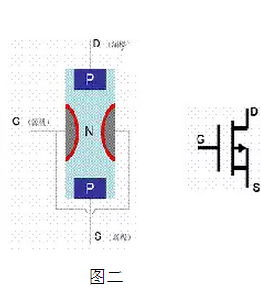 MOS transistor has two electrodes, drain D and source S. both the n-type and p-type in Figure 1 and Figure 2 are p-type silicon substrates with low doping concentration. Two N + / P + regions with high doping concentration are fabricated by semiconductor lithography and diffusion process, and drain D and source s are extracted by aluminum. Then a thin silicon dioxide (Si02) insulating layer is covered on the surface of N / P semiconductor between drain and source, and an aluminum electrode is installed on the insulating layer as gate G. This constitutes an N / P channel (NPN type) enhanced MOS transistor. 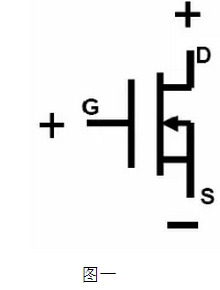 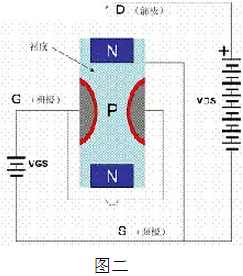 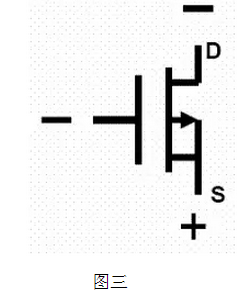 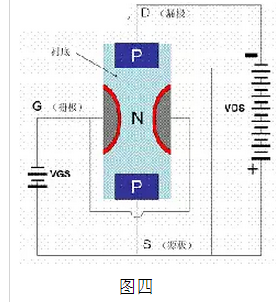 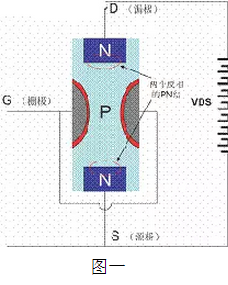 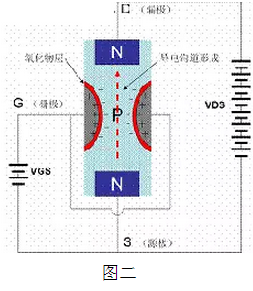 It can be seen from Figure 1 that there are two back-to-back PN junctions between drain D and source s of the enhanced MOS transistor.

When the gate source voltage VGS = 0, even if the drain source voltage VDS is added, there is always a PN junction in the reverse bias state, and there is no conductive channel between the drain and source (no current flows), so the drain current id = 0.

If a positive voltage is applied between the gate and the source, as shown in Figure 2, i.e. VGS > 0, an electric field is generated in the SiO2 insulating layer between the gate and the silicon substrate, which points to the p-type silicon substrate. Because the oxide layer is insulated, the voltage applied to the gate, VGS, cannot form a current, and a capacitor is formed on both sides of the oxide layer. VGS is equivalent to charging the capacitor and forming an electric field. Field, with the gradual rise of VGS, attracted by the positive voltage of grid, a large number of electrons are gathered on the other side of this capacitor and a n-type conductive channel is formed from drain to source. When VGS is greater than the opening voltage Vt of the tube (generally about 2V), the n-channel tube begins to conduct and form the drain current ID. we call the gate source voltage when the channel begins to form the opening voltage. It is generally expressed in vt. The size of the control gate voltage VGS changes the strength of the electric field, which can control the size of the drain current ID. this is also an important feature of the electric field used to control the current of MOS transistor, so it is also called field effect transistor. 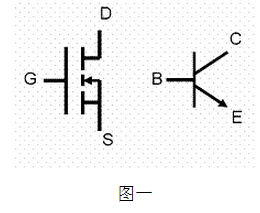 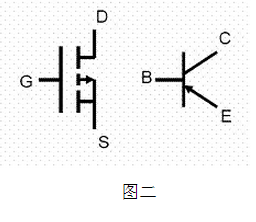 3. The gate and other electrodes of the FET are insulated and do not produce current, while the base current IB determines the collector current IC when the triode is working. Therefore, the input resistance of FET is much higher than that of triode.

6. The noise coefficient of the FET is very small, so the FET should be selected in the input stage of the low noise amplifier circuit and the circuit requiring high signal-to-noise ratio.

8. High input impedance and small driving power: as the silicon dioxide (SiO2) insulation layer is between gate sources, the DC resistance between gate sources is basically SiO2 insulation resistance, generally up to about 100m Ω, and the AC input impedance is basically the capacitive reactance of input capacitance. Because of the high input impedance, there will be no voltage drop to the excitation signal, so the driving power is very small (high sensitivity). In order to drive the collector current, the base voltage VB and the base current IB are needed in general transistor. The driving of the transistor needs power (VB × IB).

9. Fast switching speed: The switching speed of MOSFET is closely related to the capacitive characteristics of input. Because of the existence of the capacitive characteristics of input, the switching speed becomes slower, but when used as a switch, the internal resistance of driving circuit can be reduced and the switching speed can be accelerated (the input is driven by the "perfusion circuit" described later, which speeds up the charging and discharging time of capacitance). MOSFET only relies on multi carrier conduction, and there is no storage effect of few carriers, so the switching process is very fast. The switching time is between 10-100ns, and the operating frequency can reach above 100kHz. Due to the storage effect of a few carriers, the general crystal triode always has hysteresis phenomenon, which affects the improvement of switching speed (at present, the operating frequency of the switching power supply with MOS transistor can be easily achieved 100k / S ~ 150k / s, which is unimaginable for ordinary high-power transistor).

Compared with the common crystal triode, MOS transistor has the above 11 advantages, which is enough to replace the common crystal triode completely in the switch operation state. At present, the technology of MOS pipeline VDS can achieve 1000V, which can only be used as the switch tube of switching power supply. With the continuous progress of manufacturing technology and the continuous improvement of VDS, it can also be realized in the near future to replace the line output tube of CRT TV.

For more details of MOS management, please pay attention to the MOS Encyclopedia of hecotec. Some of the above contents are sorted out through the network. If there is any infringement, please contact the administrator in time to delete it;

PreviousUnderstanding the Role of Resistors in Circuits